Difference between revisions of "Yamaha RD350" 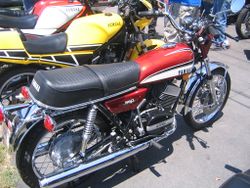 The RD350 was a motorcycle produced by Yamaha. It was the premier sport lightweight of the early 70's and was evolved from the piston port (pre-reed valve intake tract), front drum-braked, 5 speed Yamaha 350 cc "R5".

Well developed for its time, it featured a reliable aircooled, parallel twin, 6 speed (in some markets, such as the UK, the first model was sold in 5-speed form), reed valve equipped intake tract two-stroke engine. It was in production as either a dark green or brandy red with white and black side details with metal emblem "Yamaha" on the tank RD350 (1973), the RD350A (1974), simple purple tank with "Yamaha" decal on the tank, and the orange with white RD350B (1975). The B model (in the UK at least) also featured a silver and black colour scheme.

All models were equipped with "Autolube" automatic oil injection, relieving the user from the need to be mixing gasoline and two-stroke oil.

Brakes were: single front disc brake and a rear drum brake, which Cycle Magazine described the combination as the best in its class.

The frame dimensions of the street 350 were very similar to the famous Yamaha TZ250 and TZ350 series factory road race bikes, differing mainly in weight and front fork rake - the RD being ~27 degrees and the TZ being ~25 degrees. The frames appeared similar, side by side, with the street frame adorned with many brackets for the street equipment. The weight difference was substantial though, with the street going RD frame weighing almost twice as much as the "TZ" roadrace race frame.

There was a myth that RD stood for "Racing Death" and "Road Death" and that it was the Japanese revenge for the atomic bombings of Hiroshima and Nagasaki, as it claimed the lives of many US riders, but this is pure fiction (according to Japanese representatives). It was thought by some RD stood for "race derived." But a long time Yamaha mechanic recently dispelled this myth on the UK Yamaha RD forum, this is his explanation and he has worked with and raced them since the seventies: "We always understood it to be a series of letters that explain the bikes make up and function two stroke twin." The RD was a gas guzzler that would deliver anywhere between 6 - 24 km per litre.

The bike was a very snappy performer and was popular with beginner riders. However, the combination of a stiff suspension, relatively abrupt power delivery and very powerful brakes to the inexperienced riders led it to being regarded as being "too fast" for new riders (uncontrollable 1st gear wheelies in the hands of careless riders were not an uncommon problem). Its good performance, light weight, and easy maintenance made it a world favorite but it ultimately suffered at the hands of increasingly stringent noise and tighter emissions standards in the US market and changing consumer appeal.

Its also worth noting that the Yamaha RD was the UK's second most stolen vehicle in 1982, the first being a Ford Cortina.

The RD350B was assembled in India between 1983-1990 by Escorts group under the brand name Rajdoot 350. It did not repeat the worldwide success of the RD350B in the Indian market. High purchase price and poor fuel consumption can be attributed to its lackluster sales figures. However, it established Yamaha as a performance bike manufacturer in India. There were two models for the Rajdoot 350 - High Torque and Low Torque. Compared to the Yamaha RD350B that made 39 crankshaft bhp, the Indian-made HIGH TORQUE made 30.5 bhp and the later LOW TORQUE made only 27 bhp, all in quest of better fuel economy. By the time the production ended in 1990, the bike was completely indigenized with very little Japanese part content.

Like the original, Rajdoot 350 also enjoys a cult status in India. Owners clubs and organized rides are existent in almost all major cities. Today, good used bikes often change hands for 3 to 4 times the original purchase price. A lot of the bikes got scrapped or became non-runners due to lack of spares in the early 1990s. However, specialist dealers are supplying all major spares that are locally made or imported from USA and Singapore.