The Yamaha Diversion series of motorcycles are all-round touring motorcycles, and descend from Yamaha's earlier XJ series. All Diversion models are fitted with a four-stroke air-cooled 8-valve inline-four engine.

It was announced during September 2008 that Yamaha is to offer a new-generation Diversion during 2009, with a bike that has a similar ethos to the original XJ600S -- half fairing and 600cc inline four engine, although with four valves per cylinder (16 valve). [1]

Ahead of the introduction of the second-generation, 2009 Yamaha Diversion, the series consists of four main models: the XJ600S, the XJ600N, the XJ900S, and the XJ900GT.

The XJ600S is known as the Diversion in most parts of the world, and as Seca II in the North American and Australian markets. The bike has a small top fairing, although a lower fairing is available as an accessory. The XJ600S is a descendant of the earlier Yamaha XJ600 models that were manufactured 1984–1991. The bike is fitted with a 598cc, air-cooled 8-valve inline-four engine giving 61 hp (45kW) / 55 Nm output. The engine was tuned from the original XJ600 model towards improved low- and midrange power, sacrificing some of the peak power in the process.

The 600cc Diversion models were manufactured from 1992 to 2003. The US Seca IIs were manufactured from 1992 to 1998. As the Diversion/Seca II design is based on an earlier well-matured bike model, changes made to the bike during these years were rather subtle, mostly concerning improvements in fairing, a second front brake disc and small oil cooler appearing in 1998 model plus improvements in carburetors. 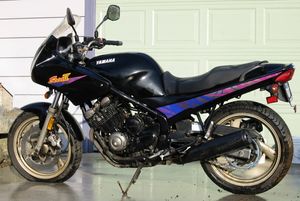 The bike is considered to be an affordable entry-level street bike that can give serious fun for its price. Despite its sporty looks, the Diversion features a more standard riding position than most 600cc sport bikes, making it an excellent commuter bike as well. Although basically having a design from the 1980s, it remained in production for quite a long time, perhaps due to its low price and all-round affordability including modest fuel consumption.

The XJ600N is almost identical to the XJ600S, except that it is a naked bike. The dashboard is different from the XJ600S, as it turns with the handlebar. This model was not sold in North America.

The XJ900S/GT is known as Diversion 900 on the European market, but was never sold in the Americas. The XJ900S and the XJ900GT is basically the same motorcycle, with the difference being that the GT has a large fairing typical of touring motorcycles, and two Krauser K2 panniers. The XJ900S on the other hand, has a small top fairing like the XJ600S. On the dashboard, that is wider than the one in the 600cc models, there are some extra gauges like a fuel gauge.

The XJ900 is a descendant of the earlier Yamaha XJ900 model. The bike is fitted with a 892cc, air-cooled 8-valve inline-four engine giving 89 hp / 85 Nm output. The Diversion 900 is a highly affordable sports/touring machine with more than enough power to make it a sensible commuter machine but also great fun to ride on less mundane journeys. The XJ900S/GT also has a driveshaft, while the 600cc models have chain drive.

The poor front suspension springs can best be replaced with progressive ones. In particular when driving with a single suitcase.

The Yamaha Diversion has been used as a police motorcycle by many different police forces all over the world. These models are custom built by Yamaha to specifications ordered by the individual police department. Generally the XJ900S is chosen for police use, but the XJ600S has also been used by some police forces. Police Spec Diversions are commonly referred to as XJ900P (P for Police), although Yamaha refers to Diversion Police Motorcycles by their model designation (XJ900S or XJ600S) as police bikes are not a separate model. Photographs and more information on Police Diversions.