The Yamaha FZ1 is a street motorcycle manufactured by the Yamaha Motor Company Ltd. of Japan. 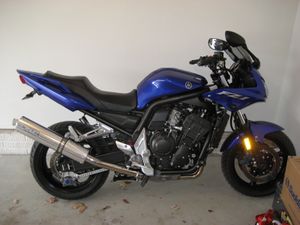 2001 was the first year that the FZ1 was produced. Models produced in the period 2001 to 2005 were known as FZS1000S (Fazer in Europe). They had a modified Yamaha YZF-R1 motor in a steel tubular frame. The FZ1 was carburated and produced around 140 horsepower (108 to 111 True horsepower). They were virtually unchanged over this period, except for different color options. In some European countries the 2005 model saw the introduction of an exhaust based catalytic converter, albeit of a rudimentary design.

2006 saw the introduction of a completely new model. The main changes included a new chassis, suspension, body work and a completely new engine, never seen before in the big Fazer. This brought the bike up to date with modern rivals. There have been instances of fuel injection glitches on the new model, although there are various 'fixes' available. The 2007 and on models have resolved most of these early fuel injection problems. The 2006 model has a 998 cc DOHC 20-valve R1 engine, which produces 150 horsepower (118 to 122 True horsepower)at 11,000 rpm, set in an all-new compact aluminum frame.

The 2001 model got a good review from Motorcyclist Magazine[4]


The 2001 model got a good review from Motorcycle-USA.com[5]


The updated 2006 model got a good review from Motorcycle-USA.com[6]