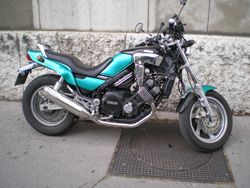 Its engine was a retuned version of the four-stroke DOHC twenty valve four cylinder in line engine found in the FZ750, producing ten BHP less than the 105 of the sports model, but having a stronger midrange.

Designed as a custom, it featured an almost solid rear wheel, low seat, and more chrome than would normally be expected. Unusually it had downdraft carburettors built into the design of the thirteen litre tank.

Frequently referred to as the mini or baby Yamaha V-Max due to a slight similarity in style, it could hold its own against the larger more powerful bike, due to its far lower weight and twenty valve aspiration.

Its current values remain high, due to its attractive unaging style, and the seat being low enough for shorter riders.