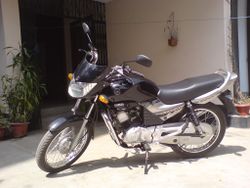 The Yamaha Libero G5 is a 106 cc, single cylinder 4 stroke motorcycle from Yamaha Motors India. It's predecessor was known as just Yamaha Libero. Unlike Libero G5, Libero had round head lights, and taco meter but lacked fuel gauge. However, Libero G5 came with a sporty head light and fuel gauge, but lacked the tacho meter (RPM Meter). A new set of air scoops with a honeycomb grille do dual duty; directing airflow over the engine block and also neatly covering the gap between the engine and the fuel tank. The Libero G5’s frame continues to be the tubular dual cradle type. Yamaha has introduced a compulsive pressure wet sump lubrication system in the 106 cc engine of the Libero G5. This new system works on a constant pressure build up that is generated by the engine itself thus enables the engine oil/ lubricant to flow evenly over all the engine components, unlike conventional lubrication that works more on gravitational forces thus may not perform as effectively.

Yamaha Libero G5 is particularly made for Indian market. However, Yamaha Libero G5 is also popular in Bangladesh. Ground clearance is a comfortable 173 mm, enabling the bike to take on speed-breakers and potholes with greater confidence. This is the largest (in terms of dimensions) motorcycle in its class. Often people confuse it to be a higher displacement motorcycle. This bike is considered as one of the best looking bike in the low-end segment of the market. In 2007 Yamaha released an up-graded Libero G5 model with alloy wheels and electric starter. Like most Indian motorcycles, this bike comes with a saree guard to increase the safety of female pillion riders. A less sportier looking version (with same engine) of this bike is marketed as Yamaha Alba. A bigger cosine of this bike with 125cc engine is Yamaha Gladiator. Some similar/competitor bikes are Hero Honda Splendor, Bajaj Platina, Bajaj CT 100.