The Yamaha Nouvo is a small CVT underbone bodied motorcycle manufactured by Yamaha Motor. It was introduced in April 2002 for Southeast Asia markets and In 2004, Yamaha Motor make a major breakthrough for introduced this model to South America market, which is Brazil and rename it to Yamaha Neo. 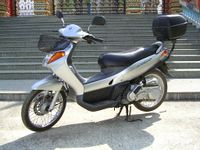 2002 Yamaha Nouvo with top box at the rear 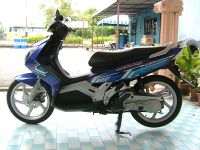 After several research and extensive studies in Asian region, the Nouvo was developed under the model code "AT115" and in April 2002, Yamaha Motor has successfully marketed Yamaha Nouvo in Malaysia, Indonesia, Thailand and other Asean countries[1].

Yamaha engineers specially developed the frame with the same or higher level of rigidity as a moped bike in order to achieve a moped-like ride and good handling performance but also have the same level of comfort as a scooter. This vehicle is powered by 4-stroke, SOHC 2-valve single-cylinder engine which is characterized by its strong torque in the mid-to low-speed range.

In 2004, the Nouvo has been given an aggressive fecelift by Yamaha team, this includes the headlight which is similar to Yamaha YZF-R1 sport bike. For safety concern, the taillight also has been design with the addition of a retroreflector device. In order to improve stability, front suspension is also has been set-up with new settings. Other cosmetic changes is the body cover and passenger's footrest[2].

After a huge success in the markets, Yamaha Motor Company in Vietnam has release a special edition model for their market in 2007, this model known as Yamaha Nouvo Limited[3]. It features newly design V-shape headlight and newly body stripes but the engine specification is still remain the same with all Nouvo series that available except for Nouvo Elegance. This model only comes with two colors design - White Wolf and Black Knight.

As 2008, Nouvo is still the best selling moped-like motorcycles in Southeast Asia region especially in Thailand, Malaysia and Indonesia because of its unique design style that attract many younger people to buy this motorcycles. Literally the word Nouvo or Nouveau in French word means new or fashionable.

After the successor to the Nouvo, on February 2008[4] Yamaha Motor Company in Thailand and Vietnam has launch an all new Yamaha Nouvo Elegance (LX in Vietnam) for their markets under the model code "AT135", the major changes in this motorcycle are the engine, the engine power are now has increased from 115cc to 135cc (11 horsepower). In addition, the engine cylinder and forged piston are now made from DiASil (die-cast aluminum cylinder) which is more lightweight while giving it a theorically power-to-weight ratio, to eliminate engine overheating while long journey, liquid-cooled radiator are now installed at the right side of the engine, as a result it giving more performance and reliability to the engine. Cosmetic changes also has been made, this includes the body cover - more sharp edges were added with large seat for comfortable ride. The Nouvo Elegance was also launched in Malaysia on August 2008 with the name "Yamaha Nouvo LC"[5]. The Nouvo Elegance model will be released in Brazil on 2009 according to Yamaha. 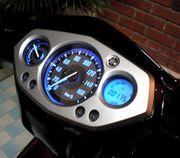 SE - Special Edition
* Spoked wheel still available with the latest model in other country as an optional accessories.

Although Nouvos are not designed to be performance motorcycles nor hold any legitimate racing victories, they have been used for racing ever since their introduction. In 2003, several privateer (also sponsored) motorcycles team in Malaysia entered the Nouvo to compete in Malaysian Cub Prix Championship. In Thailand, the Nouvo is also being raced in underbone drag racing.

In recent years, the Nouvo has rapidly gaining its popularity as a platform for modification and customization (e.g: airbrushing or audio system) by an enthusiast community especially in Thailand and Malaysia. With a huge variety of aftermarket performance parts including racing engine block, racing carburettor and a fine tuning suspension kit to make the Nouvo quicker, its popularity in legal or illegal street racing scene has become a subculture phenomenon, particularly in Southeast Asia country.

Look up nouveau in Wiktionary, the free dictionary.