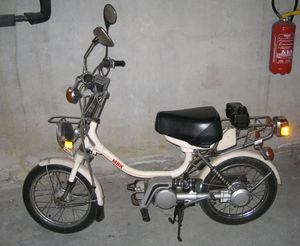 CT50 - a Yamaha QT50 marketed by the French company MBK

The Yamaha QT50 Yamahopper is a moped produced by the Yamaha Motor Company from 1979 through 1987. The 50 in the name is derived from the 50cc engine displacement. QT50s were popular in the late 1970s and 1980s because of their ease of use and maintenance, extremely low gas mileage, and legality in most U.S. states among pre-driving-age teenagers. QT50s and other mopeds are enjoying a resurgence in popularity due to their nostalgic appeal.

The QT50 and the similar Honda Express share a skeletal, almost insect-like in appearance. The Yamahopper is not really a scooter, as the QT50 has no fairing, sports footpegs rather than footboards, and its 2-stroke reed valve engine is slung beneath the monotube frame motorcycle-style. The QT50 closely resembles contemporary mopeds, but without the bicycle pedals typical to the class, leading some to refer to such vehicles as "nopeds." The Yamahopper has an approximate top speed of 30mph is stock form, and thus can be used for city driving.

The compact, weatherproof drivetrain of the Yamahopper resembles a minimalist version of the enclosed shaft drivetrains of most BMW motorcycles. Its simple, maintenance-free shaft-drive contained in the single-sided swingarm eliminated chain maintenance, safety and wear concerns as well as weather wear factors and contributed to the durabilty and ease of use of these tiny motorbikes. The drive unit also incorporates a traditional centrifugal clutch and variable-rate automatic transmission known for simplicity and durability. The simplified driveshaft setup makes wheel changes easy.

Other noteworthy features of the QT50 were its unusual charging and ignition system incorporating a 6-volt battery and alternator. This system eased cold starting: when the key was placed in the "start" position,the ignition supplied a stronger than normal spark for initial starting, but did not allow the engine to rev so as to avoid burning the piston. Once kicked to life with the reverse-mounted, left-side kickstart lever, the key is turned to "run" and the engine is able to rev freely.