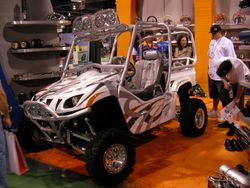 The Yamaha Rhino is an off-road vehicle made by Yamaha Motor Company. The 2-person four-wheel drive vehicles are in unique class called Side by Side which is in between the size of ATVs and Jeeps. The Rhino is gaining popularity in racing with customizations similar to the full-size vehicles. Polaris and Arctic Cat have made vehicles in the same class.

The basic premise involves the chassis, engine, transmission, suspension and basic characteristics of a large utility 4x4 ATV, but with two side by side bucket seats with seat belts and a rollcage. The controls are similar to those of a golf cart, with pedals and a steering wheel rather than the handlebars of a conventional ATV. Rhinos are particularly useful at reaching remote areas for search and rescue type operations, leading to increasing use among first responders such as law enforcement and firefighters. It is able to carry two people and their gear into places other vehicles simply can't reach due to its 54" width. Targeted originally for general utility and recreational use by farmers, ranchers and hunters, but now has more recreational appeal. The Rhino, which is operated similar to a car, is also popular with some disabled people as a means to get places a wheelchair can't. This capable vehicle tops out at 41MPH stock.

The Rhino's 700 is powered by the same liquid-cooled 686cc SOHC 5-valve 4-stroke engine used in Yamaha's Grizzly 700 ATV, driving through a V-belt automatic transmission. The pushbutton 2wd/4wd/4wd differential lock are the same for both machines. Rhino ground clearance is 12.1 in., 0.3 in. more than that of the Grizzly.[1]

The Yamaha Rhino has earned a number of awards for performance and safety, including the "2008 Sports Utility Vehicle of the Year" and a rating of "5 out of 5 stars for safety" - the highest safety rating in its class - from Side X Side Magazine (April 2008 edition).

Yamaha was the first manufacturer to offer doors as a standard feature on all side-by-side vehicles and has provided additional handholds. In safety information provided to Rhino users and in on-product labels, Yamaha promotes safe and responsible driving, and warns that, as with any motorized vehicle, safety features are no substitute for driving responsibly. Yamaha strongly recommends that both drivers and passengers always wear proper safety gear such as helmets and protective eyewear, make certain the three-point seat belts are properly fastened, and keep arms and legs in vehicle enclosure at all times. Yamaha also states that the Rhino is only recommended for operators age 16 or older who have a valid drivers license and that passengers must be tall enough to place both feet on the floorboard with his or her back against the seat back drivers and passengers.

The Rhino was the first of a new class of vehicles known as Recreational Off-Highway Vehicles (ROVs). Another popular classification for the vehicle is a Utility Vehicle (UTV).

As is common practice when a new class of vehicle emerges on the marketplace, the U.S. Consumer Product Safety Commission (CPSC) is reviewing the ROV product category, including the Rhino. Manufacturers of ROVs have also formed the Recreational Off-Highway Vehicle Association (ROHVA) to develop standards specific to the ROV product category, develop and promote model state safety legislation, and provide other safety initiatives in consultation with the CPSC.