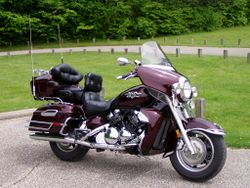 The Yamaha Royal Star Venture is a luxury touring motorcycle built by the Yamaha Motor Company. It was introduced in 1999 and was manufactured, largely unchanged, through the 2009 model year. Though Yamaha revived the Venture name which they used on the 1983-1993 Venture Royale models, the Royal Star Venture shares little with its predecessor except for the time proven liquid cooled V4 shaft drive power package. It departs from the earlier sport touring styling in favor of a classically styled touring look.

In 2000 Yamaha produced the Millennium Edition Royal Star Venture. This year model was Pearl White/Ivory two tone with tan seats. Only 1,500 of these were produced.[1]

The Royal Star Venture is a large motorcycle. Rider seat height is 28.5 inches. It weighs 807 lbs dry, which yields a weight of 869 lbs with oil, coolant, and a full fuel tank. The Royal Star Venture has a 67.1 inch wheel base.[2] Among the stock amenities are a full AM/FM/Cassette stereo system with integrated CB, and electronic cruise control. The shock absorbers are air adjustable for preload to help compensate for different load sizes. It has a large trunk and side bags. The seats are either traditional flat panel, or pillow top depending on the model and year.[3]

The drive package on the Royal Star Venture includes a liquid cooled 1298cc (referred to as 1300cc) V-4 engine. It has four valves per cylinder, overhead camshafts, and shim over bucket valves. The five speed overdrive transmission is part of the engine case and both the engine and transmission share oil. The drive shaft and final drive assembly are built into the left side of the double sided swing arm. Swing arm motion is damped by a monoshock mounted in the center of the frame. The clutch is of the wet plate design and is hydraulically activated by the left hand lever.[4]

A few minor changes have been made for the 2001 and newer years. The trunk bottom of the 1999 model had a tendency to crack and the antennas would come loose and fall off. Both issues were fixed as warranty claims. Shock absorber design was changed slightly in 2005 to incorporate an elevated vent tube to prevent oil loss in the event of a tip over. The vehicle has a five year front to rear warranty so the few issues that have developed have been resolved without cost to owners.

The Yamaha Royal Star Venture lends itself to easy do it yourself customizations. There are many vendors making custom RSV specific add-ons and replacement parts. Yamaha encourages Star Owners to customize their bikes. The Yamaha website has Virtual Bike Show/Calendar Contest. http://www.starmotorcycles.com/star/feedback/08_StarCalendarImages.aspx?id=7&pg=all

The RSV can also be triked. There are several custom made to fit trike kits available that produce factory quality trikes.

Venture clubs abound with big meetings every year in the US and Europe with most countries having national clubs. The web brought about many online clubs. VentureRider.org http://www.venturerider.org is the largest and most active of these clubs with members worldwide and regular meetings (VentureIns) and more informal get-togethers throughout North America and Europe. It also has a great technical resource for all model years as well as a classifieds area for those looking to buy and/or sell. VentureRider.org is a free site.

There is also a Venture group on the Delphi Forums http://forums.delphiforums.com/vrider/start. Delphi is advertising based with no membership fees required.

The 2009 VentureRider International Rally will be held August 3rd - 6th at The Hub in Marble Falls, Arkansas.

The 2008 International Venture Meet was held in Spain, July 4th-6th http://venture-spain.com/foro/index.php?topic=251.0 and there were Venture riders from all the European clubs as well as members of the Venturers attending from North America.