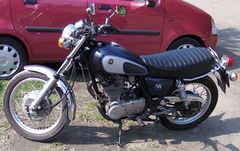 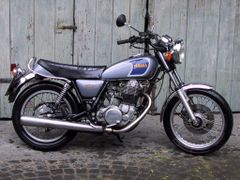 The Yamaha SR500 is a popular thumper. It first started production in 1978, as a road-going version of the popular Yamaha XT500. It experienced good sales throughout the US, Europe and Australia. The SR500 is no longer sold in any market worldwide, but it's sister bike, the SR400, continues to be manufactured in Japan. This is essentially the same bike as the SR500, but with a shorter stroke and heavier muffler to pass tighter emission restrictions.

The SR500 was well received on conception, largely due to its contemporary styling and reliable www.yamaha.de single-cylinder 500cc powerplant. The chassis and engine has served as a popular basis for many faux café racers, 'street trackers' and even bobbers. SR500's are raced competitively in historic class across the world.

Released in 1978, the SR500 was Yamaha’s attempt to cash in on nostalgia for the period when 500 singles were the preferred mount of serious riders. The SR500 eventually led to the SRX600 and Yamaha now produces a 660 road single. Although, the reputation of the SR500 remains so strong, that Yamaha has continued to produce it both for the Japanese domestic market (in 400cc form to take advantage of registration laws) and for the European market where its popularity has never diminished.

The roaring seventies saw a breathtaking development: faster, bigger and heavier, the motorcycle world seemed to turn around. The dream was made of multi-cylinders with constantly increasing horse power. It was a fascinating development and most manufacturers did everything to boost this mainstream fashion, when Yamaha turned around and seemed to go backwards. Forgotten were the times in the sixties where big singles touched the heart of enthusiasts. The famous British 4-stroke singles, such as Norton, Velocette, or BSA had died, smoother and faster bikes, replaced them. They were less vibrating and so much easier to ride and the breed of big thumpers seemed to share the fate of the good old dinosaurs. No wonder the world was kind of shocked when the forgotten came back: the XT 500 brought back the steam hammer sound of a big single four stoke- and the world was prepared to listen.

Engineering was reluctant at first

Shiro Nakamura (later also responsible for XS 750 triple, XS 400 twin, XS 1100 four and the SR 500) who developed the XT engine remembers: "When the off road market started booming in the US, bikers remembered the advantages of the good old singles. Soon the sales guys started to request the development of a four stroke for off road. Honestly speaking, we engineers were quite reluctant in the beginning, since we knew about the difficulties of these big thumpers. As soon as they had a bit more power they turned out to be unreliable and they were shaking like hell."

Nakamura-san continues, "Now I can confess that developing this first big single was a real nightmare. It was only the second four-stroke designed by Yamaha. We tested many different configurations including DOHC and even cylinder head oil cooling, but the XT was supposed to be simple and reliable and we turned away from all these complicated solutions.

Many technical problems to be solved

First, the heavy pistons gave us countless problems. They seized up and were punched. Cylinder and head development was as difficult. We even had a cylinder that broke in the middle. At that time we didn't even try balancer systems, although we had many problems with broken crankshaft bearings as well. The con-rod had no big end bearing but was turning on a needle bearing that needed a low pressure lubrication. We did make this choice instead of using a one-piece forged crankshaft with assembled connecting rod because it allowed us to build a much more compact engine and was also cheaper to produce due to its vertically split crankcase. In the end all our technical problems delayed the roll out by more than one year But we had succeeded, XT was now more reliable than a big single 4-stroke had ever been. Although it was over square with a bore and stroke of 87 x 84 mm, (all British bikes were long stroke) we obtained the real character of a big thumper. The two-valve head gave a flat torque curve while the smaller flywheel allowed the engine to rev up as easily as we wanted. Dry sump and short stroke also allowed for better ground clearance and a more compact engine than former British bikes ever had."

The first XT 500 was shown at the US dealer convention in September 1975. Europeans had to wait till the summer of 1976 before they could press their boots against the heavy kick-starter.

The XT proved its performance and reliability by winning the first big African rallies, which were on the rise in the late seventies. It started with Paris-Abidjan-Nice and then the godfather of all rallies, the famous Paris-Dakar, which confirmed the supremacy of the XT 500. In France alone 62,000 XT 500's were sold from 1976 to 1990.

SR 500: the thumper for the open road

Shunji Tanaka's idea from the beginning of the XT project, was to develop a street model on the same engine base for the European market. He faced resistance first from marketing people, who were convinced that the big thumper era on the road was definitely dead. "We will only sell some units" he used to hear. Tanaka believed in his intuition and pushed the SR 500 through for the launch in the Japanese market in 1978. While for the XT the priority had been reliability and simplicity, the keyword for this street model was "easy to use". It explains the major difference between the SR and XT engine: the electronic ignition and a clever new concept to make kick start easier. It was a manual decompressor system.

Nakamura tells the background story: "It came in fact from an accident! Mr. Morinaga, Yamaha Motor's Technical Director, tested the SR prototype and got a wrench to his ankle as he tried to kick it. Easy starting then instantly became a first priority!"

The SR 500 was designed by Atsushi Ishiyama, today President of GK dynamics. He worked on the very first Yamaha and contributed a lot to create Yamaha's reputation in design. He says: "Our choice was to design the new SR 500 with a strong family image and a strong link to our first four stroke, the XS 650 twin, which was also inspired by British design at first." The SR 500 was going to become a legend as one of most reliable and easy-to-maintain motorcycles ever built. It sold until 1999, with a huge demand in Germany and Japan, until new noise and emission regulations signalled the end for the this big air-cooled single.

The XT 500 in the Paris Dakar rally

XT 500 entered desert Rallies in 1976 in the second edition of the first rally of this type organised, the "Paris-Abidjan-Nice" also called "Côte d'Ivoire-Côte d'Azur". Four official XTs were at the start on December 29th 1976. They were completely standard with the exception of a 25 liter fuel tank and a sturdy luggage carrier supporting tools and two 5 litre jerry cans. Aside those machines, engaged by the French importer, were 14 other XTs. It was a fantastic success, a total of 10 XTs finished the hard endurance desert race where Gilles Comte took the victory. For years XT and Paris-Dakar Rally were words that belonged together. In 1979 and 1980, Cyril Neveu won on an XT 500.

Commonly an extra oil line is run to the exhaust side of the cylinder head - a design flaw that has been rectified in the later SR400 models. Many SR owners fabricate their own oil lines to both intake and exhauser rockers to ensure proper lubrication.

1978 witnessed the debut of both the SR400-a bike with a super-long reign as a top seller in the mid-range class and that even now maintains a deep-rooted popularity in Japan-and its sister bike, the SR500.

The SR400 was born with the same air-cooled, 4-stroke, overhead cam, 2-valve, single-cylinder engine from the big XT500 off-roader, but with a shortened stroke and refined for road sports use, resulting in a final capacity of 399-cc. Equipped with a decompression lever, dry sump oil lubrication that used a portion of the frame for its tank, and a kick indicator for the kick-start engine, the SR400 started more easily than any single-cylinder motorcycle had up to that point. The front fork, the rims and the brakes were all taken from the TX650 and the tires employed a semi-block pattern for running on dirt, like a flat-tracker.

In 1985, a drum brake was adopted in the front, and the front wheel size was dropped from 19 inches to 18 in order to produce a retro look. Greater reliability was also targeted for the engine through a change in oil lines as well as other parts. From 2001, hydraulic front disc brakes were installed, and the SR400 evolved to a machine that provided even greater enjoyment during acceleration and deceleration than was usual for a sports bike of its age.

Since it is a single-cylinder bike, you'll experience the advantages of the lightweight, compact, slim body as soon as you get on. Not only is it easy to balance at a stop, but Yamaha's return of the footpeg position to that of the initial model, coupled with the repeated improvements made to the seat, were also effective in creating a comfortable riding position with only a slight bending of the knees. The motor is still kick-started, but no special knack is required; the engine awakens with only a grip of the decompression lever and a light step down on the kick pedal, without any need whatsoever to think about top dead center.

Handling displays a calm, straightforward character from beginning to end, and the engine also doesn't necessarily value response over all else. Rather than winding all the way up to high revs, shift up a little bit early and you'll experience a smoother ride while enjoying the beat of the engine and the surrounding scenery. That's the kind of relaxed running that's most suitable for the gorgeous SR400.