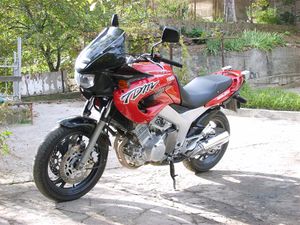 The Yamaha TDM is an 849 cc two-cylinder motorcycle, manufactured by the Yamaha Motor Company of Japan, that first came out in 1991. With a lot of torque, and 78 horsepower, it is considered to be a very good all-rounder.

It was never a big seller in the United Kingdom but in Northern Europe sales were very strong. In 1996 Yamaha released the Mk2 TDM with updated bodywork and a 270 degree instead of a 360 degree firing order. This upgraded engine was first seen on the Japanese market in 1995, when Yamaha introduced the TRX850.

The TDM is classified as Dual Sports or Adventure Sports. Its engine was derived from the Paris Dakar winning Yamaha XTZ 750 Super Tenere. Although too large and heavy for serious off-road work, the TDM has a long travel suspension and is well suited for gravel tracks and light off-road use. Popular modifications include fitting R1 brake calipers, luggage racks and dual sports tires.