Yamaha produced road going 2-stroke motorcycle, based on the TZ250 Yamaha racing bike. Parallel twin, V-twin, and reverse cylinder variants. It evolved as a natural replacement for the popular RD 250/350 LC series of the 1980's It has Yamaha Power Valve System (YPVS) which raises and lowers the exhaust port depending on the rpm of the engine, the YPVS servo starts to open at about 6,000rpm.
In standard form 50bhp is claimed at 10,000rpm. Although mid 40's is more realistic, and will not rev much above 9,500rpm in standard trim owing to the restrictive standard exhausts and ignition boxes.

Still raced in the Yamaha Past Masters race series with the British racing club - BMCRC. Racing engines currently claiming circa 56bhp @ 11,000rpm. Racing pre-mix fuel ratios typically 1:30. Standard exhausts are difficult to improve on in terms of power and torque but they are very heavy and impede ground clearance. Jolly Moto exhausts are popular replacements as they are light and produce similar performance, and allow better ground clearance.

Matt Oxley was the first person to lap the Isle of Man TT course at over 100mph on this bike in 1987. An F3 racing kit was produced for a few years which included ignition boxes, carbs and exhaust pipes, helping increase maximum revs, power and torque. 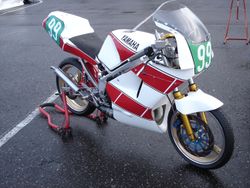 Production started in June 1986. At a cost of around $6,000 new on release it was seen as an expensive bike for a 250cc, but given that places such as Japan and Australia had 250 licencing laws in place one can imagine the stir that something that could hassle 750's on a track caused. 2MA variant being the UK variant and the 1KT model being the domestic Japanese variant. Variations between these two models being minimal, i.e. wording on the brake master cylinder in English or Japanese. Lighting arrangements were also different, to comply with UK type approval regulations, particularly the indicators were mounted on stalks rather than faired into the bodywork.

Then came the reverse cylinder version 3MA, then the V-twins 3XV. The variants followed the configuration of the racing TZ250 of the time.