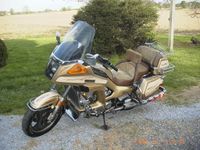 1983 MK1 Yamaha Venture Royale Owned and photographed by Gary Swartz - This is the very first Venture ever produced and is still on the road.

The Yamaha Venture Royale is a premier touring motorcycle manufactured in two forms by Yamaha from 1983-1993. [1] 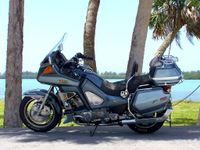 Considered by many to be ahead of its time in innovations and leading edge technology. The powerful and smooth V4 engine and excellent handling resulted in what may have been the predecessor of sport touring bikes available today. There are still many of these bikes on the road around the world racking up hundreds of thousands of miles.

The 1198 cc V-Four engine from the MK1 Venture was modified for performance and was used as the engine in the Yamaha V-Max. Many of these changes were incorporated into the MK2 version of the Venture.

The drive package on the Venture Royale includes a liquid cooled V-4 engine. It has four valves per cylinder, overhead camshafts, and shim over bucket valves. The five speed transmission is part of the engine case and both the engine and transmission share oil. The drive shaft and final drive assembly are built into the left side of the double sided swing arm. Swing arm motion is damped by an air preloaded monoshock mounted in the center of the frame. The clutch is of the wet plate design and is hydraulically activated by the left hand lever.[3] 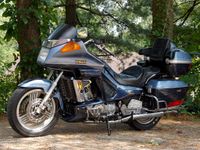 Venture clubs abound with big meetings every year in the US and Europe with most countries having national clubs. The web brought about many online clubs. VentureRider.org http://www.venturerider.org is the largest and most active of these clubs with members worldwide and regular meetings (VentureIns) and more informal get-togethers throughout North America and Europe. It also has a great technical resource for all model years as well as a classifieds area for those looking to buy and/or sell. VentureRider.org is a FREE site.

Other online clubs abound and also have a strong following at Venturers, http://www.venturers.org again with regular meetings (Rallies) and informal get-togethers. Venturers does charge a membership fee.

Another web site dedicated to the 1996-2001 model years of cruiser style Royal Stars is http://forums.delphiforums.com/royalstar/start. And for the 1999 - 2008 Royal Star Venture and Royal Star Tour Deluxe an excellent source for help and information is the Royal Star Venture and Tour Deluxe Fourm which can be found at http://forums.delphiforums.com/vrider/start. The Delphi Forums which support both of these locations is advertising based with no membership fees required.

The 2008 International Venture Meet was held in Spain, July 4th-6th http://venture-spain.com/foro/index.php?topic=251.0 and there were Venture riders from all the European clubs as well as members of the Venturers attending from North America.

The 2009 VentureRider International Rally will be held August 3rd - 6th at The Hub in Marble Falls, Arkansas.