The Yamaha Virago was the first V-Twin-powered cruiser-style motorcycle produced by a Japanese manufacturer, as well as one of the earliest mass-produced motorcycles with a single shock rear suspension. Originally sold with a 750 cc engine in 1981, Yamaha soon added 500 cc and 920 cc versions. 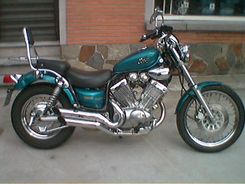 The larger-displacement Viragos were eventually phased out of production, replaced by the V-Star and Road Star series of motorbikes. The last motorcycle to bear the Virago name was the 2007 Virago 250. For 2008 it was renamed to the V-Star 250.

According to Motorcyclist magazine [1], the early Virago has a design flaw in the starter system. This magazine states that the starter's defect exists in early Viragos models (1982 and 1983). However, the same flawed starter system was installed in the XV700, which was produced until 1988. The XV1000 had an improved system since it began production in 1984, which doesn't present the flaws. Also the XV1100 and the XV750 (1989 and up) do not present the starter system flaws found in the earlier Viragos. Motorcyclist Magazine[2] suggested to weld the ring gear to its backing plate to solve the problem. Other solutions commonly used are the use of shims, which was Yamaha's proposed solution, then also the use of a new designed idler gear. None of these solutions are considered or proved to be permanent, and applying only one of them will not address other existing flaws in the system; however, great improvements have been reported by Virago owners that have applied them.

According to Doctor Virago, “After trying all of the suggested fixes, I found that the starter problem can be a non-issue, if, twice in a riding season the starter is removed from the bike and overhauled”. This over-haul would include a complete teardown of the starter and all parts thoroughly "Gunk Tank" cleaned. After the parts are cleaned and inspected for failed components, all electrical contact parts are cleaned with an emery cloth, ensuring a good clean contact, and all grease-able parts are greased. Reassemble, and reinstall. Doctor Virago says "If I over-haul my starter at the beginning of the season, I am pretty much guaranteed a trouble free season. The second rebuild half way through the season, will Iron Clad Guarantee I’ll have no Problems".