The Yamaha XJ900 was born out of the original Yamaha XJ model motorcycle, the XJ 650, which was the foundation for the whole XJ series. 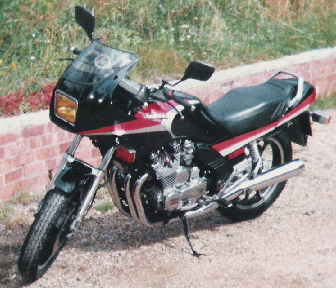 In its original incarnation launched in 1983, the XJ900 had an air-cooled, double overhead camshaft, 853 cc 4-stroke, 4 cylinder, 8 valve engine. Originally fitted with a handlebar mounted bikini fairing, its handling came in for criticism. This was quickly replaced with a frame mounted upper fairing and retrofitted to all models. The XJ900 came with anti-dive front forks, shaft drive and triple disc brakes.

A revised version was launched in 1984 and displaced 891 cc. Aside from the engine capacity increase it was equipped with more conventional forks than its predecessor and a belly pan came as standard. The increase in engine capacity meant the carburettors went up from 35 mm to 36 mm. Aside from these changes it was nearly identical to the original and was manufactured until 1994.

The XJ900 Diversions were their replacements.