The Yamaha YZF-R1, introduced in 1998, is a sport bike manufactured by Yamaha Motor Company.

Yamaha launched the YZF-R1 after redesigning the Genesis engine to offset the crankshaft, gearbox input and output shafts and this "compacting" of the engine yielded a huge dividend in that the total engine length was now very short. This allowed the wheelbase to be shortened significantly which resulted in much quicker handling and an optimized center of gravity.

The launch model Yamaha YZF-R1 was available in white/red or blue. In Europe the blue proved to be the most popular and was in very short supply, added to by early models being subject to a worldwide recall for a clutch problem. This bike has a compression ratio of 11.8:1. with a 6-speed with a multi-plate clutch transmission. Yamaha today describe the launch R1 as the true value of "Kando".[1] 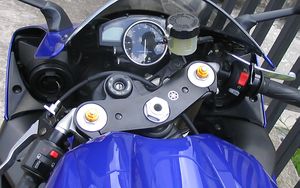 The 1999 R1 saw only minor changes, apart from paint and graphics. Notably improvements were a redesigned gear change linkage and the gear change shaft length which was increased for better gear shifting. Fuel tank reserve capacity was reduced from 5.5 liters to 4.0 liters, while the total fuel tank capacity was unchanged at 18 liters. A second worldwide recall to change a coolant hose clamp under the fuel tank which could under hard use come adrift affected the early 1999 models, with all 1998 models were all recalled. 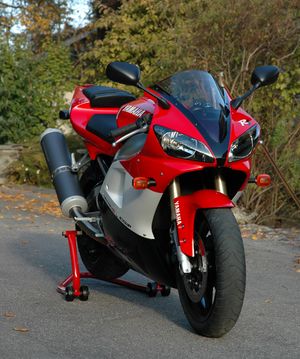 In 2000, Yamaha introduced a series of changes to improve the bike, plus minor changes to the body work to allow for better long duration ride handling. The R1 was an excellent bike to live with on short runs, but due to its quick handling was not a favorite longer run bike. Yamaha's main design goal was to sharpen the pre-existing bike and not redesign it. Even so they instituted over 150 changes in hopes of making an already light, sleek and mean motorcycle even lighter, sleeker and meaner. For example, even with the addition of the new Air Induction System, which weighs four pounds, the overall weight of the bike is down five pounds to 414 lb (188 kg)[2] dry. At 127.8 bhp (95.3 kW),[2] top-end output remains the same but changes to the engine management system are supposed to result in a smoother, broader distribution of power.The bodywork is still unmistakably R1 although a few changes were made resulting in a 3% reduction in the drag coefficient. The headlight housing has a sharper profile, the side panels are more aerodynamic and slippery and the windscreen has been reshaped for better rider protection. In fact the bodywork changed so much that bodywork from previous R1s will not fit the Y2K edition. Also updated is the seating area. The fuel tank is reshaped with a more relaxed rear angle and deeper leg recesses to provide for better rider feel. The seat extends further towards the front of the tank and the new, steeper seating position puts additional weight on the front end. All of this is aimed at improving weight bias and offering sharper cornering and more stability. Again, the resounding theme here is to sharpen what was already a very sharp package. The carburetors have been rejetted in an effort to improve throttle response -- especially in the low end -- all the way up to the bike's 11,750 rpm redline. The redesigned camshafts are lighter and use internal oil ways to lubricate journals that, when combined with reduced tappet clearance, provide less friction and create less engine noise. Also changed within the crankcase is the gearbox featuring a taller first gear, a hollow chrome-moly shift-shaft with an additional bearing and a completely redesigned shift linkage and foot pedal. These changes are aimed at nixing last year's transmission complaints as well as helping to transfer as seamlessly as possible the R1's prodigious power to the pavement.

A new fuel injection system was introduced for the 2002 year, which worked like a carburetor by employing a CV carburetor slide controlled by vacuum created by the engine. With a similar power output to the 2001 bike, the engine was developed (larger bore, shorter stroke) to rev higher, faster and for longer. For 2003, the only change was the choice of colors. The previous years all had a "Red" option, but this was replaced by a black with red flames "Special Edition" which cost an extra $100. Also in 2002, Yamaha released the newly developed "Deltabox III" frame, which, with its hydro formed construction, dramatically reduced the total number of frame welds, thereby greatly improving the frame's strength and torsional rigidity. The rear end of the motorcycle was updated and streamlined with a LED taillight. This allowed for very clean rear body lines when choosing one of several common after market modifications, such as removal of the turn signal stalks and stock license plate bracket; and replacing them with assorted available replacements that "hug" the body or frame. Also, front end lighting was improved in 2002, between the higher definition headlights and also side "parking" lights within the twin-headlight panel, giving more after market possibilities to remove the front blinkers and utilize these front lights as directional or hazard markers while stopped. 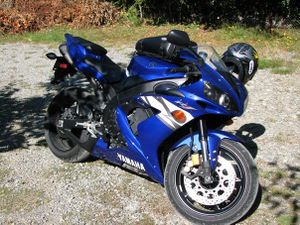 With the competition advancing, Yamaha took to a major development. This included style updates like an underseat exhaust, and performance upgrades including radial brakes and for the first time on an R1 Ram-air intake. Furthermore, the wheelie-tendency known from earlier productions is drastically reduced by changing frame geometry and weight properties. The all new engine (no longer used as a stressed member of the chassis) featured a separate top crankcase and cylinder block. The 2004 R1 produces a stated 172 hp at the crankshaft (excluding RamAir,180 with the ram air) and also weighs 172 kilograms. Also newly added for this year was a factory installed steering damper. Combined with the changes to the frame, it helped to eliminate the tendency of the handlebars to shake violently during rapid acceleration or more so during deceleration on downgrade and less-than-perfect surfaces (aka "tank slapping"). 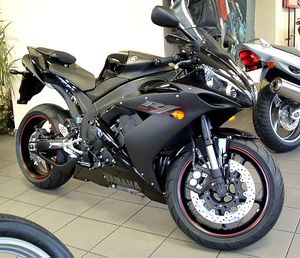 In 06, Yamaha is now rated with 180 hp at the flywheel. In addition, the swingarm was extended 20 mm longer due to acceleration instability. Also, in 2006 the 50th anniversary of Yamaha racing in America, Yamaha released the limited edition version in original Yamaha racing colors. The model (LE/SP) featured a Kenny Roberts replica paint pattern with yellow and black paint, and front and rear custom Öhlins suspension units developed by the people who work on the YZR-M1 MotoGP bike. Custom forged aluminum Marchesini wheels specifically designed for the LE shaved nearly a pound of unsprung weight. And a back torque-limiting slipper clutch, and an integrated lap timer rounded out the package making the LE more of a production racer. It had an MSRP of $17,999 and only 500 units were made for the United States. 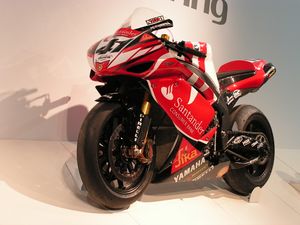 In late 2008 Yamaha announced they would release an all new R1 for 2009. The new R1 takes engine technology from the M1 Moto GP bike with its crossplane crankshaft, the first ever production motorcycle to do so. Crossplane technology, puts each connecting rod 90° from the next, with an uneven firing interval of 270°- 180°- 90°- 180°. The idea of this technology is to reduce internal crankshaft torque, thus giving the new R1 a more linear power delivery. Yamaha claim the bike would give the rider 'two engines in one', the low torque of a twin and the frantic pace of an inline four. As with previous incarnations of the R1 the 2009 model keeps its YCC-T (Yamaha Chip Controlled Throttle)

A Yamaha R1 was adventurer Nick Sanders' tool of choice for his record breaking motorcycle circumnavigation of the world.