The Yamaha YZF750 was produced from 1993 to 1998 in two forms, the standard R and the single seat SP. The 750R was the only available version offered to consumers in the US.

The Honda Fireblade and Suzuki's GSX-R750 tended to overshadow it on the road and the R1 has taken over on the track but the YZF remains an excellent bike.

The 749cc in-line four-stroke engine, with five valves per cylinder, is rev-happy and the delivery is linear due to the EXUP valve. Power builds steadily, but really takes off at the top-end. To get the best response it has to be worked hard.

The gearbox action is smooth and positive. However, if you don't feel like going mad, the bike can be ridden easily on the mid-range and is perfectly happy cruising around at civilized speeds. 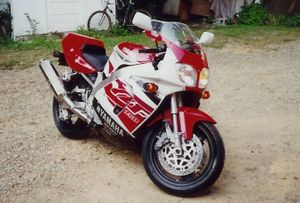 The Yamaha YZF750R was introduced into the United States in early 1994, MSRP $9799. The only color available was a white/blue/yellow combination.

A 1996 model was an early factory release in 1995, MSRP $10,499. The only color available was a white/black/red combination. This model was Sport Rider Magazines '95 Bike of the Year.

Excessive oil consumption is a major problem with this engine even when new. Some users have to pour a litre of oil every several hundred kilometres.

1994 YZF750 owners in the US complained of overheating problems especially in urban environments. Yamaha addressed this issue on the 1996 model by upgrading to a larger capacity, curved radiator. When accelerating from a stop, YZF750 owners have also complained of a "flat spot" or "glitch" in carburetion at about 2000-2500 rpm. The overheating and carburetion problems may have been caused by an extremely lean carburetor setting from the factory. Installing a jet-kit and adjusting the carburetors to a richer setting allowed the engine to run cooler and eliminated the carburetor "glitch".

Valve clearance should be inspected more often than Yamaha recommends as this is a problem.

Carbon build-up on valves may also cause the valves not to open enough reducing compression.